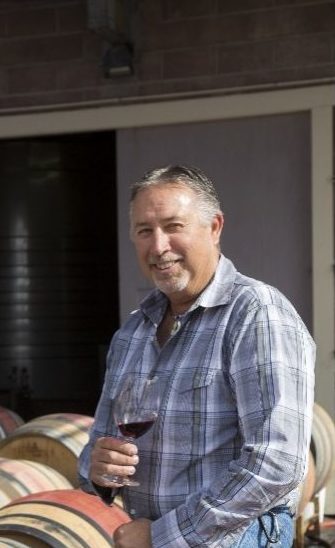 Trentadue Winery grew out of a rich winemaking heritage spanning four generations. Victor Trentadue’s maternal ancestors made their home in the walled city of Lucca in the Tuscany region of Italy until economic hardship in the early 1900’s impelled them to seek a better life in America. Victor’s great grandfather, Guiseppe Santini, traveled to the United States to establish a place for his wife and four daughters. He found that place in the small Dry Creek Valley located in Sonoma County, just north of San Francisco, Calif., amidst a growing community of Italian immigrants. It is not known if Guiseppe had a history of making wine before coming to America, but once settled in the Dry Creek Valley, he soon became renowned among his neighbors for making an outstanding table wine. Winemaking was a family affair with his oldest daughter, Paulina, and later her daughter, Evelyn (Victor’s mother), helping. The basement of the house was his winery, and soon neighbors were stopping by regularly to fill their jugs, sit at the long plank table, and enjoy a glass or two with some homemade sausage or pasta.

Victor’s father, Leo, came from a long farming tradition. In 1958, Leo and Evelyn were growing cherries and apricots in the Santa Clara Valley but looking for a place to resettle with their three children, Annette, Victor, and Lisa. Evelyn’s strong ties to the Dry Creek Valley area were the deciding factor, and they chose to make their home in the nearby Alexander Valley. Leo soon became renowned for his top-quality Zinfandel.

Paul Draper, founder and winemaker for Ridge Vineyards, sought Leo out, and in addition to selling grapes to Ridge, the Drapers and the Trentadues became lifelong friends. The California winemaking industry was in its infancy, but with encouragement and advice from Draper, the family opened Trentadue Winery in 1969. Victor worked alongside his parents, learning to drive the tractor with wooden blocks strapped to the pedals, when he was eight years old. Over the next few decades, Victor learned and performed all functions of producing the wines. He was helped often by his high school sweetheart, Cindy, who joked that it was the only way she could have a date with him. After a few years’ break, Victor and Cindy married in 1990 and have two sons, Steven, 33 and Tyler, 29.

Trentadue Winery is in its 51st year and is still a family-owned business showcasing the personal style of the Trentadue family. Today the winery has grown to produce 35,000 cases of beautifully crafted, award-winning wines.