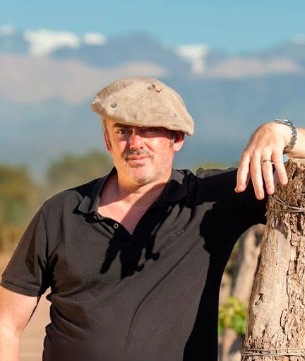 I have always been very passionate about wine and my family has some small vineyards in Switzerland. From a very young age, I have been participating in the elaboration of different vintages. It was very interesting for me to see all the different processes from the vineyards to the bottle and I decided to be a winemaker. From 1989 to 1994 I did my winemaking school between Chateauneuf and Changing in Switzerland with different training in the vineyards and at the winery “Les Celliers De Champsec” in Valais, Switzerland. From 1995 to 1999 I was in charge of “Cave Du Chavalard” Fully Switzerland. In 2000 I did the harvest at “La Bodega Miolo” Porto Alegre, Brazil.

From 2001 to 2004 I was in charge at “Cilmor Winery” in Worcester, South Africa. From October 2004, I’m have been in Argentina as a Winemaker for Mendoza Vineyards. I’m busy with some new projects for Argentina, like BRC and Flo (Fair Trade). Regarding the wines, we have a lot of potential in this country. Argentina has a strong local market consumption. They weren’t really interested in exporting wines and it’s for this reason the Argentinean wines are not so well known in the importing country, but now we must export and my biggest project is to give an excellent image of Argentinean wines around the world.