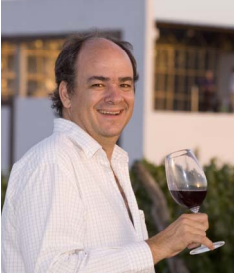 Patricio Santos has wine in his blood. His dad, Ricardo Santos (aka “Mr. Malbec”), is a pioneer in the world of Argentine wine. Patricio helped plan, plant, and manage his family’s La Madras vineyard and winery, where he is now the winemaker for “El Malbec de Ricardo Santos.” He is also the winemaker for Telcos, the winery he and his brother, Pedro, founded and built from the ground up in 2004. Since 2005, Patricio has been the winemaking consultant at bodega “Chañarmuyo Estate” in La Roja Argentina. Patricio earned his undergraduate degree in Agricultural Engineering from the Universidad Nacional de Cuyo in Mendoza, Argentina, then went on to get his Master’s in Viticulture and Enology, from the University of California at Davis. Before receiving his degree, Patricio was an advisor at Santa Ana Winery in Mendoza, was part of the technical team for Catena Group, and did harvest work at Cardinale Winery (Kendall-Jackson) and Chimney Rock Winery in Napa Valley.