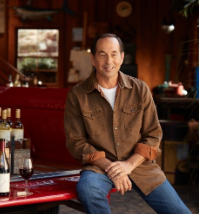 Joseph discovered a passion for wine at an early age, starting off as a wine steward at a local restaurant in upstate New York, where he was raised. He spent a decade serving as a world-class sommelier followed by another decade as a wine industry executive. In 2005, he was tinkering around with a new wine with a friend and was reminded of how his dad used to tinker around the garage, rebuilding old stock cars with his friends. This memory inspired him to leave his career behind to pursue his dream: start his own wine company to make wines from California in honor of his dad, Josh.