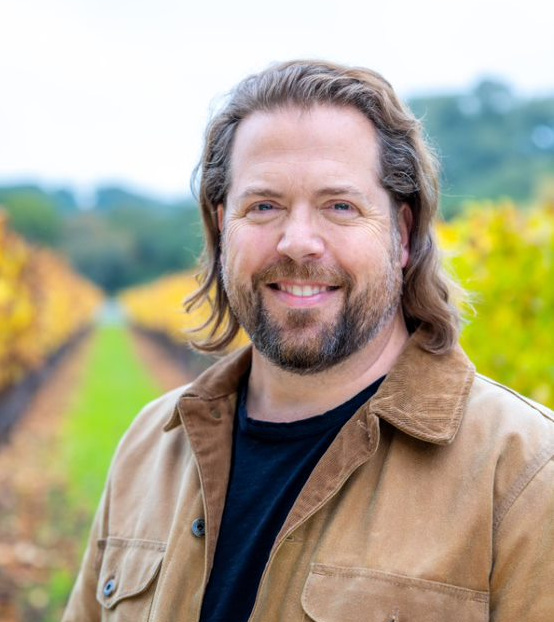 Geoff Whitman’s passion for wine was born in Boston, MA, where he paid his way through college by working in various positions at some of the city’s most exciting restaurants.  In the fall of 1994, Geoff moved from Boston to Santa Barbara, California, and began exploring wine on a deeper level.

Geoff had a strong desire to learn about making wine and gain firsthand experience working in the vineyard.  After taking on a management position at Wine Cask, a fine-dining, wine-centric restaurant the day after he arrived in California, he began to get involved in wine production. A winemaker himself, the owner of Wine Cask had introduced him to some notable local wineries, including Au Bon Climat and Qupé, where Geoff first had the opportunity to work harvest and in the cellar.

After five years in Santa Barbara, Geoff entered into the distribution side of the business, joining Southern Wine & Spirits as a fine wine salesperson in Beverly Hills and Hollywood. This experience led him to Robert Mondavi Corporation in 2001, where he held key sales positions, first in Los Angeles, the southwest region, and then in National Accounts On-Premise, calling on hotel and restaurant chain accounts.

The year 2005 brought two new personal & charitable projects to the mix.  Ledbetter is a high-end Syrah project focusing on the many top growing regions in California from Sonoma and Napa to Santa Barbara and is a partnership with a dear friend and Grammy-nominated singer-songwriter Chris Pierce with the plan that his earnings would be donated to Pearl Jam’s Vitalogy Foundation to support various causes important to the band, whom he has known for several years.  The second partnership, Spaceman, along with legendary Boston Red Sox pitcher Bill “Spaceman” Lee was created to pay homage to Lee’s California roots and Geoff’s New England roots, and the proceeds are given through the Red Sox Foundation to inner-city youth baseball and the Red Sox Scholars program benefitting families who cannot afford tuition for secondary schools.  On both projects, Geoff remains engaged as winemaker and co-owner.

In October 2007, Geoff joined his friends Rob, Jr. & Lydia Mondavi as managing partners & assistant winemakers for their brands Spellbound and Medusa.  Geoff and his wife, Jemina, relocated to Napa, where Geoff could immerse himself in the vineyards and winery, working alongside Rob Mondavi, Jr.  In 2009, Michael Mondavi asked Geoff to take on the additional role of general manager for his Michael Mondavi Family Estate, calling on Geoff’s winemaking and production skills, along with his expertise in fine wine sales and marketing. After selling the Spellbound and Medusa brands in 2015, Geoff left the Michael Mondavi Family and began a new chapter.

In his “spare” time, Geoff is also an accomplished photographer focusing on Rock & Roll and street, primarily.

Geoff, Jemina, and their young sons Gryphon and Jack live in the Napa Valley.