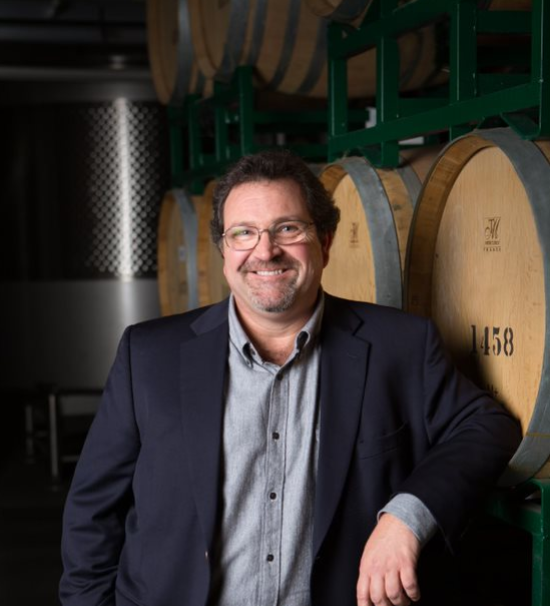 David Coventry is a native of Monterey, California, so he knows firsthand just how special it is here – from the vineyards and the landscape to the arts and the lifestyle. Although he took a circuitous path with stints in chemistry and band management, David eventually returned home to Monterey, where he is the head winemaker for Talbott Vineyards.

Following high school on the east coast, David earned a Biology degree from University of California Santa Cruz. Upon graduation, he worked as a protein chemist making therapeutic drugs. After four years in this field, David decided it was time for a change and turned his attention to managing the San Francisco rock band Box Set. During these years, David gained great experience in logistics, people skills, and most importantly, general good times. Naturally, these two previous careers gave David the perfect skill sets to become a winemaker.

In 1997, David’s first stint in winemaking was as an enologist at Chalone Vineyards in the beautiful Gavilan mountain range above Soledad. During his time there, David advanced to assistant winemaker. In 2001, David spent a vintage as the head winemaker for Cloninger Vineyards in Gonzales, where he had a crash course in the wine business from vineyard to bottling.

The following year, he took the winemaking reins at Morgan Winery in Salinas. Here, he gained valuable insights into the marketing and production of fine wine. In 2005, two of his wines were placed on the top 10 wines of the year lists in Wine and Spirits magazine. The same year, he was the only Monterey winemaker to make the 2005 top 100 wines list in Wine Spectator magazine.

After three years at Morgan, David decided to try his hand at small lot Chardonnay, Pinot Noir, Merlot and Syrah from Monterey’s premier vineyards. Prior to his move to Talbott in 2016, David was the Director of Winemaking and General Manager for RF Wines and Puma Road Winery in the Santa Lucia Highlands, where he honed his skills to craft world-class Pinot Noir and Chardonnay, as well as Bordeaux varietals, Tannat and Petite Sirah. David refers to Puma Road as a “Flavor Research Station,” where he was able to experiment with grapes from all parts of Monterey. David has dedicated his career to proving that Monterey produces some of the finest wines available and plans to continue showcasing the deliciously unique flavors that can only come from this place.

David has dedicated his career to proving that Monterey produces some of the finest wines available and plans to continue showcasing the deliciously unique flavors that can only come from this place.