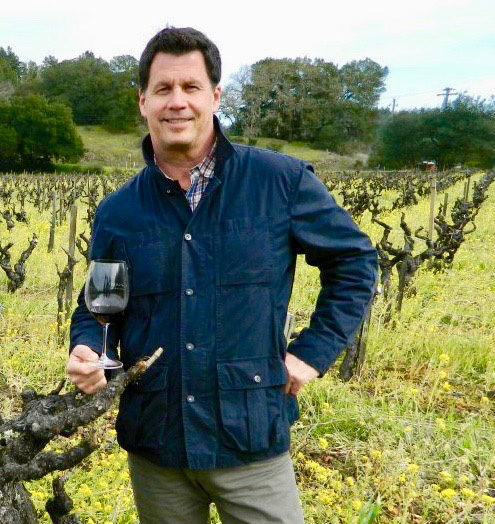 Adam Fox is the Managing Partner at Canard Vineyard in Napa Valley, CA. Originally from Colorado, his family moved to Los Angeles in the early 70’s. From a young age, Adam was passionate about creating art. Over the years the desire to create would take many forms. First, it was the culinary arts. Adam, a self-professed “foodie”, preferred cookbooks to textbooks and would read them from cover to cover after school. This lead to jobs as a chef in some of LA’s ﬁnest restaurants. It was in those kitchens that he developed an appreciation for wine and started down the path that would eventually lead him to Canard Vineyard.

Upon completion of high school, and with the inﬂuence from his days in Hollywood, Adam moved to Massachusetts to attend the College of Communication at Boston University where he received a degree in Television and Film. After graduation, Adam returned to Los Angeles and began his career in the entertainment industry. After years of working for large companies like Disney and ABC, he left the corporate world and LA, looking for a more fulﬁlling creative outlet in New York City. With a keen eye for the visual and strong production knowledge, Adam turned his talents to construction and architecture, establishing Altered Estates Inc, an interior design and renovation company. Each project was another blank canvas and opportunity to use his imagination to create something extraordinary.

Years later, after having a family, he left Manhattan and moved both family and business to the bucolic Oregon countryside. On buying trips to San Francisco, Adam always left a little extra time to visit Napa Valley and indulge his lifelong appreciation of wine and food. It was on one of those trips that he realized winemaking was the ultimate culmination of his interests and talents. Within a few years, he would move to the Bay Area and immerse himself in learning everything he could about what made a truly incredible bottle of wine. In 2010, Adam met Rich Czapleski, one of the last true gentleman farmers in Napa Valley. The two shared a common desire to create wines rooted in integrity that focused on quality over quantity and artistry over commercialization. Over the last ten years, Adam has infused Canard Vineyard with that artistry, creating elegant, terroir driven wines that can only be achieved in small quantities as they have been created without compromise. It could be said that under Adam’s direction, Canard Vineyard now produces art in the form of wine.